I brought my family to Saji Ya tonight because it was 1/2 price saké night, bottles included. Mu is sold only by the 720 ml bottle at Saji Ya, so I had been looking for an oppportunity to try it. Normally it is $39.00: we got it for $20!

I really loved this saké. It seems that other people love it too, because it won a gold medal at the U.S. National Saké Appraisal, which was held in Hawaii in July. The aroma is nice and fruity with a bit of melon. The taste is very savory, a bit dry, and super smooth. I definitely want to try this saké again and, since I am usually the only one at dinner drinking saké, it is a good thing that in Minnesota you can now recork bottles (or screw the cap back on) and bring them home with you. Actually, I heard that there is someone who eats lunch at Saji Ya nearly every day and orders a bottle of this for himself and usually finishes it. I hope I never get to that point!

Saké is more popular now than ever and it seems that there are quite a few saké related events around the world, so I've created a calendar to help keep track of them. Please send me an email or leave a comment here if you know of other events and I'll add them to the calendar.
Posted by Valerie at 5:20 PM 2 comments:

For your next tasting party!

Disposable saké cups! I could have used these at my last tasting party. I'll certainly stock up for the future! 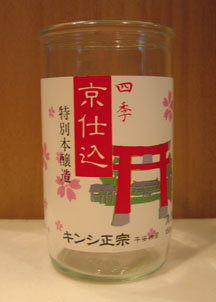 When I was last in Japan, I made an overnight trip to Kyoto, mainly to see Takigi o-noh at the Nanzen-ji temple. After the play, I decided that since it was rather late I would have a small dinner in my hotel room. I stopped at the 7-11 near the temple to get some snacks and I was surprised that they had a pretty big selection of saké! I had no idea which to get, so I decided to get a Nazen-ji souvenir cup-saké. Even if it was awful, I could dump it out, keep the cup as a souvenir, and raid the mini bar for something palatable. It was actually pretty good, at least it seemed right with my convenience store bento. About the only things that I can read on the label are "20%" and "65%" - I'm assuming that is 20% alcohol and the polishing rate is 65% rather than vice-versa!

I was reminded of this story when I found THIS on gaijinphoto. This makes me so jealous! I will definitely try to get to Ajinomachidaya when I am next in Japan. Check out the cup-saké page on their site!
Posted by Valerie at 10:58 AM 2 comments:

I'm in Colorado for nearly two weeks, first in Denver and then in Colorado Springs. Naturally, while I'm here, I am going to try to find new sakés to try.

Our first night here, we had dinner in a nice little Japanese restaraunt called Sushi Han. There were only a couple of choices for saké and they weren't even listed by name, so I chose the mystery "Junmai Ginjo" and hoped for the best. I was happy when they brought the bottle to the table and I found that they were serving Hakushika Junmai Ginjo (SMV +0, acidity 1.4). The aroma was very subtle, just barely rice I thought. But the taste: Chocolate! Chocolate rice! Really, once the idea of chocolate entered my mind, I couldn't think of anything else, except for the fact that this saké felt thick. It almost felt like it had the consistency of oil although that makes it sound unpleasant and it wasn't.

When we were finished with dinner, I covertly hid the bottle in my bag and I'm looking at it now and wondering what "BL.BL" means. It is stamped on the label in the manner that a bottling date usually is, so I tried googling "saké date on bottle" and had no luck with what I was looking for, but I did find a bizarre sounding movie. Saké Bottle Battle (2004) is described as follows:

A man and a woman, on their pivotal fourth date, dine together in a Japanese restaurant. But when the man demands that the woman steal a saké bottle for him, their individual truths -- alternately eccentric, kinky, and perfectly understandable -- cause them to bond in uniquely human fashion.

I have the feeling that this movie won't be in my netflix queue anytime soon.

Today I had the chance to stop in at Chateau Liquors, a very nice shop with a large selection of wines and a few sakés on the shelf as well. I bought one of each of everything that they had that I hadn't tried before: 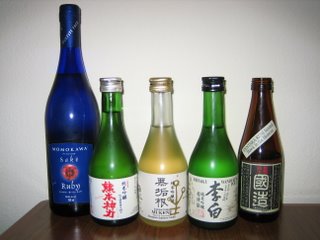 Notice the bottle on the right is missing it's cap. That is because I decided to begin research on some of my new saké right away. Tentaka Kuni "Hawk in the Heavens" (SMV +3, seimaibuai 55%, acidity 2.1) was the first thing I tried. The aroma on this one was pretty light; only a bit of rice. There was a slight alcohol taste, but also a bit of fruit that I wasn't expecting from the scent. The acid was a little sharper than I like, but overall, I think this was a nicely balanced saké. I didn't finish the entire bottle, so I will try the rest later and compare the "fresh" and the "been open a few days" taste.

I believe that, barring a saké emergency that I must relay, the report on my Colorado trip will pick up in a few days when I reach Colorado Springs. 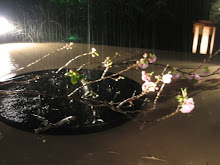